The Andon-Reid Inn is fortunate to being only a half mile from downtown.  We are sufficiently suburban to be out of the normal territory of black bears (so our guests are safe), coyote (so our pets are safe) and deer (so our hostas are safe).  Nevertheless, we have still been blessed with a range of visiting critters, some domesticated and some a little more on the wild side.

One way we encourage our wildlife is by recycling breakfast leftovers at our owner’s residence at the back of the property.   So, don’t worry if you can’t finish all your French toast or pancakes.  Every evening there is an eager crowd of foxes, possums, raccoons and even Susie the skunk, ready and willing to polish-off any uneaten breakfast goodies.  And if they can’t manage it all, the crows take care of the remainder in the morning.  Nothing is funnier than watching a crow trying to take off with more than its bodyweight in waffles crammed into its beak. 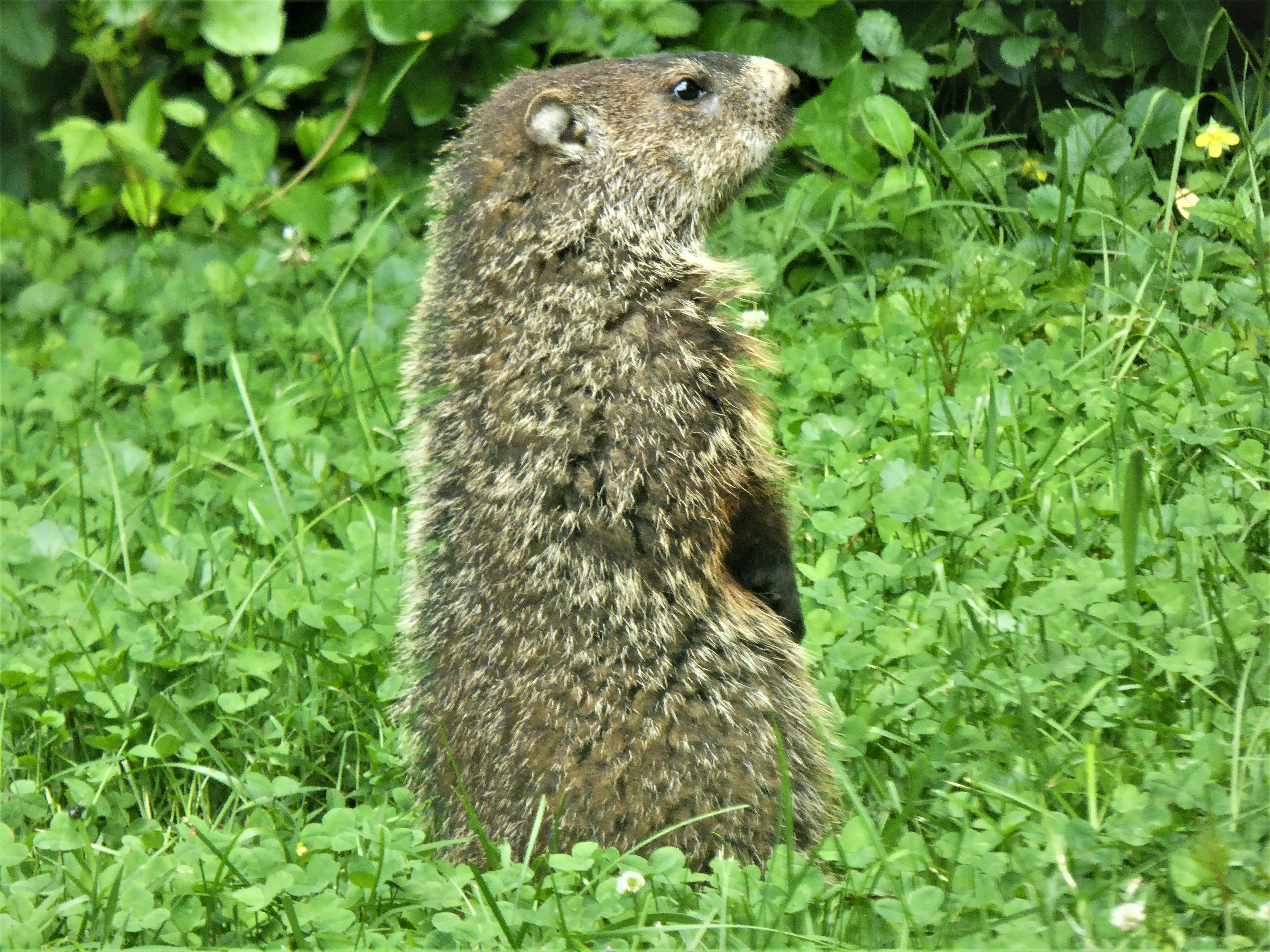 At the Inn itself, we also have our furry friends.  Hordes of squirrels and chipmunks abound, and Gretel the Groundhog has been here most afternoons, chomping away on the lawn near the Adirondack chairs to build up her fat stores for the deep hibernation ahead.  Additionally, because of Andrea’s generous heart and love of all animals, we have long been fully established as a “breakfast club” for our neighbors’ roaming, geriatric pets (and a lunch & dinner club for them as well). 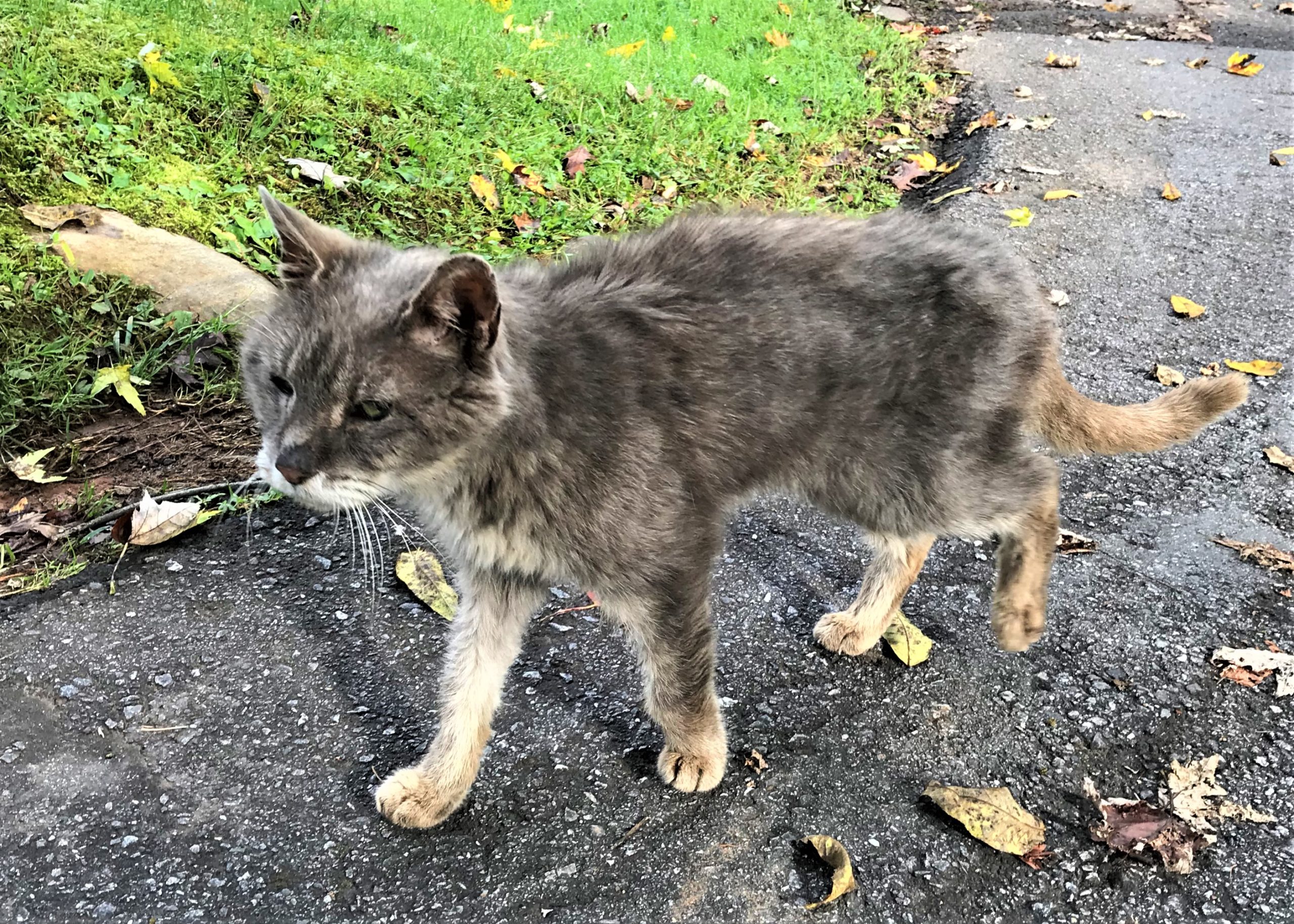 The most recent senior member of the breakfast club was Shadow the cat from across the road – older brother of the late and much missed Bibb.  He was 22 years old (or 104 years old in human years), looked every minute of his advanced age, but was still going strong and craved the attention of our lovely guests as much as he did the gourmet cat food we dished out for him several times a day.  Alas Shadow is no longer with us.  He recently succumbed to an “industrial accident” at his own home when he fell afoul of a toppling stack of sheetrock and is now chasing chipmunks in kitty-cat heaven after a life well lived indeed. 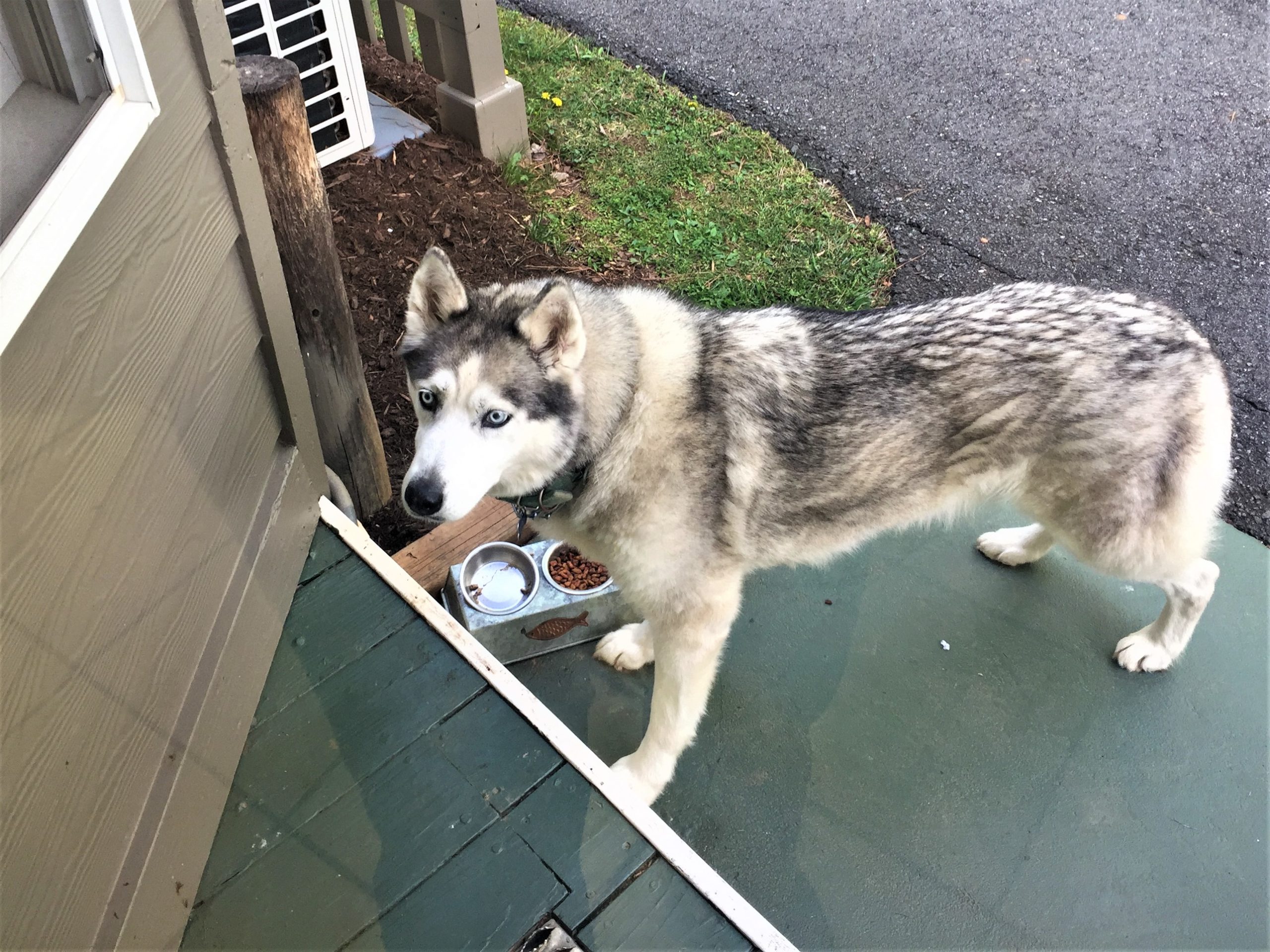 Word of the breakfast club must have gotten out around the neighborhood as, for a while, we were also joined by Sadie the Malamute (big white Husky).  Sadie is a not-so-little old lady who has still got a good measure of playfulness despite her advanced years and bad hips.  Her owners from a street nearby seemed to have let her roam freely around the neighborhood and we were a frequent stop on her route.  She enjoyed finishing off Shadow’s food as well as the high-class doggie kibble we added to the breakfast club menu.  We have not seen Sadie in a while and assume she is safely back home and better confined.  If she returns to the Inn and you run across her, you’ll find that Sadie is incredibly gentle and sweet so don’t let her size and wolf-like appearance put you off. 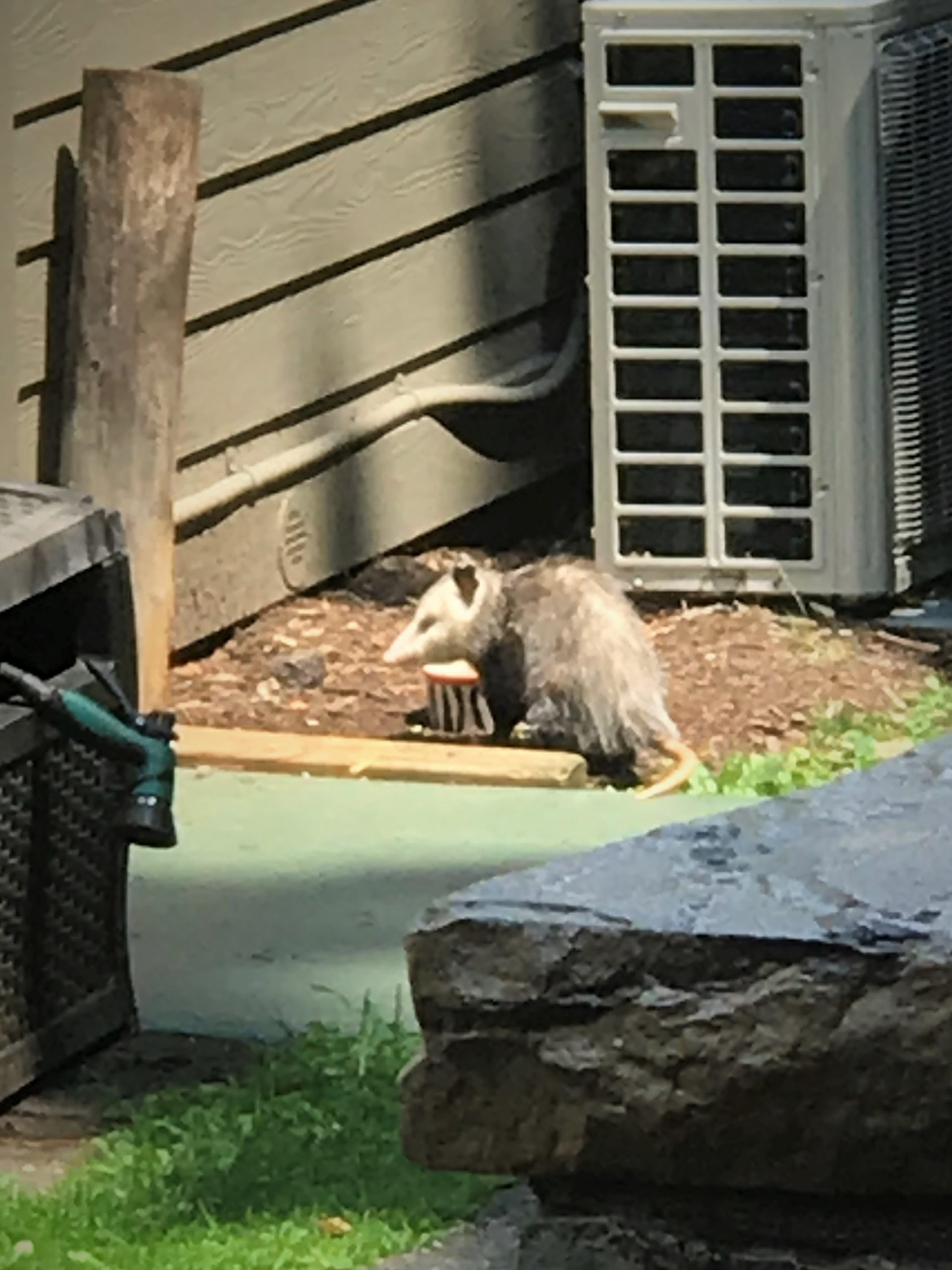 Shadow and Sadie did not always finish their food.  This left a bunch of kibble and canned food for the clean-up crew led by Polly the possum. I’m not sure if it is a by-product of reduced human activity due to social distancing or some other reason, but the local wildlife has certainly gotten bolder.  Just the other day Polly the possum decided not to wait for Shadow and Sadie to leave her some food.  Instead, she blithely waddled up to their food bowls in the middle of the day and had a feast.

When Poly isn’t around we get the “Fab-Four” i.e. our band of cheeky raccoons (John, Paul, George and Ringtail) who gleefully polish-off the remaining cat and dog food (washing it in the water bowl and leaving an unholy mess).

A while ago, I was coming up to the Inn for my end-of-the-night security check and surprised the Fab-Four as they chowed down on the pet food at our kitchen steps.  John and Paul took off back into the bushes as soon as they sensed me coming, but George and Ringtail had their snouts down in the food bowls and didn’t spot me until I was quite close.  As they believed their escape route was cut off, they did what raccoons do when cornered – they climbed the nearest tree, except the “tree” in this case was the kitchen screen door. 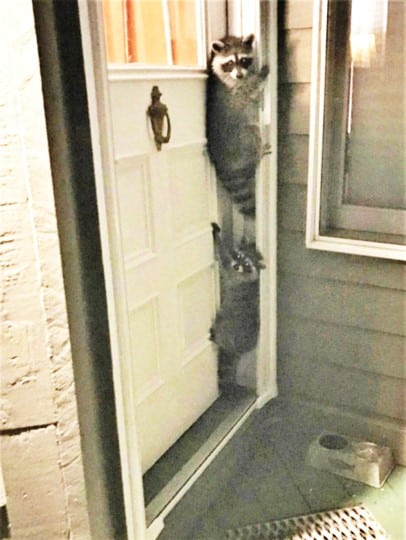 This left me with a dilemma.  I needed to get into the kitchen, but the only way was through the door that the raccoons were hanging from.  I couldn’t dislodge them without getting even closer – and believe me I did not want to get closer to two frightened and well-armed raccoons who were about to switch behavior from “flight” to “fight”.

To complicate things, Shadow (the very old cat) decided this was a good time to walk up the driveway for a midnight snack at the food bowls.  As Shadow was deaf and partially blind, he remained unaware of the raccoons’ presence and was about to unwittingly stumble into an almighty fight he would not come out of at all well.

What we had, therefore, was a Mexican standoff.  I had to come up with a solution.  I suddenly remembered that we had some fine wooden walking sticks by the guest entrance and thought I could use one of these to prod George and Ringtail off the kitchen door from a safer distance.  To ensure there was no unwanted critter-to-critter confrontation in the meantime I picked Shadow up and tucked him under one arm, taking him with     me while I went around the Inn to pick up a walking stick.

Walking stick in one hand and Shadow in the other, I returned to the kitchen door.  Fortunately, while I was gone the raccoons had seized on the opportunity to hightail it back into the hedges.  Walking-stick encouragement was not required after all so Shadow and I celebrated his lucky escape with some kitty treats.

With Shadow and Sadie now gone, and with the days getting shorter and cooler, there is less critter activity at the Inn and things are generally quieter. Our guests are taking a page out of Gretel the Groundhog’s book and using the opportunity to hibernate a little – hunkering down by the warm fireplace in their room, or by the large fireplace in our comfy guest lounge, wrapped in a cozy blanket, and chatting, reading a book, or simply relaxing.  If you would like to join them and experience the quiet pleasure of the festive season at the Andon-Reid Inn, call us on (828) 452 3089 to book your room or book direct on our website www.andonreidinn.com.  Winter in the mountains awaits.