“It was a dark and stormy night….” (actually that bit comes a little later in the story).  Let me start by (re)introducing Bibb before recounting her adventure. 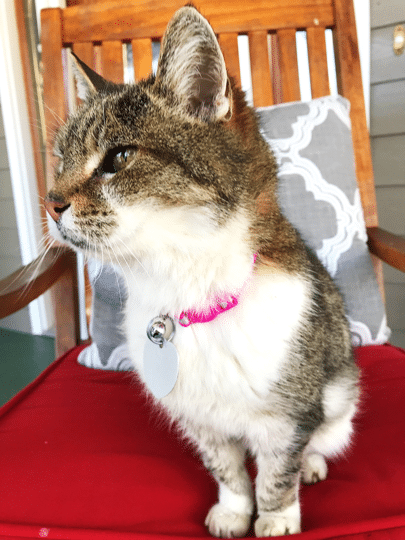 Bibb the cat sporting her new pink collar and tag

Bibb is the Inn’s outdoor kitty.  She is an important amenity for the Inn, greeting guests on arrival (in case they have any food) and keeping them company on the porch.  She nominally belongs to the big white Queen Anne Victorian house next door.  However, she has been visiting and eating at the Andon-Reid Inn for most of her 19 plus years.  After some groundhogs evicted her from the barn next door a few years ago we installed a deluxe heated cat carrier (the ”Bibbloo”) on the Inn’s front porch and she has been sleeping here as well.

Bibb is a lovely, gentle little old lady and at age 19 plus is approaching the 100 year mark in cat years.  Unfortunately, she is not immune to the encroaching health problems that accompany old age and we are grateful for each day that she is still with us….and that’s the context for the story that unfolds below.

It WAS a dark and stormy night last week, unusually windy, lashing rain and not fit for man nor beast.  The next morning, instead of being greeted by Bibb howling down the driveway demanding breakfast (as happens every morning) I was met with silence.  I didn’t think much of this and assumed she had slept in, but after serving breakfast Andrea and I went to the “Bibbloo” to rouse her. 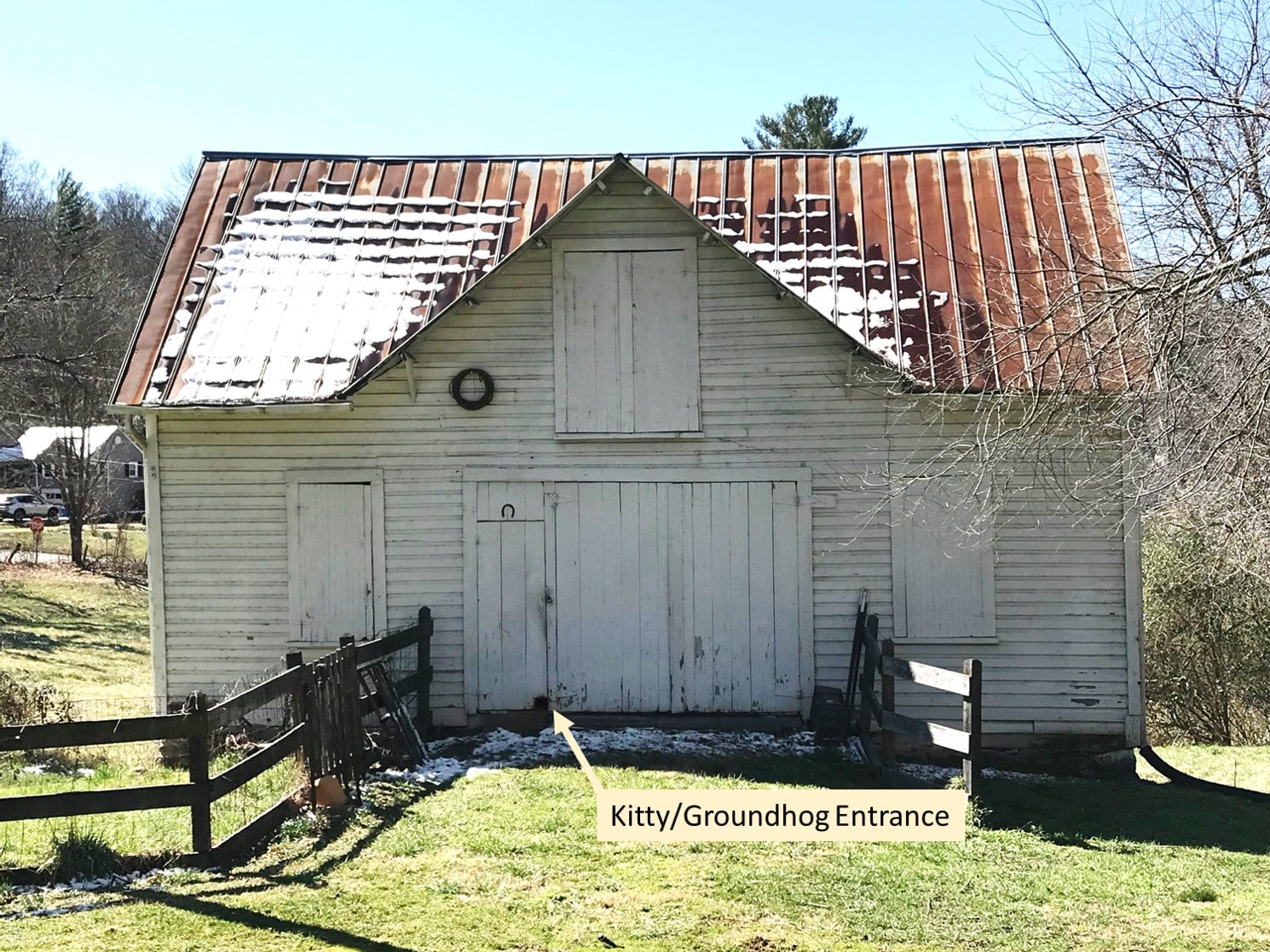 The barn Bibb used to sleep in before the groundhogs took over.

She wasn’t there.  So, we started to search around the Inns grounds in her usual haunts and still no luck.  As the previous night had been so stormy we began to worry that she might have been hurt.  We extended the search to our neighbors’ properties, woodpiles and outbuildings in case she was holed-up and recuperating in a quiet place somewhere.  We even got permission to cut off the lock on the neighbor’s barn (Bibb’s old bedroom) to search in there.  All of this was fruitless.

To our knowledge Bibb had never even crossed the road so we couldn’t imagine where she had gone – Bibb had vanished and there was nothing more we could do but hope against hope that she would eventually show up.

All the time, in the back of our minds was the sad thought that Bibb had gone the way of many old outdoor cats and, having decided her time had come, had found a quiet, peaceful place somewhere to curl up for her final, eternal catnap.  The next day came and there was no sign of her.  The same thing the next day.  We were starting to face the real possibility that we wouldn’t see her again.

Then, out of the blue came a text from Amber, one of our former assistants at the Inn.  The text read “Have you seen Bibb?” which was strange as there was no way she could have known Bibb was missing.  We called her straight away to find out what’s up and listened to her amazing tale. 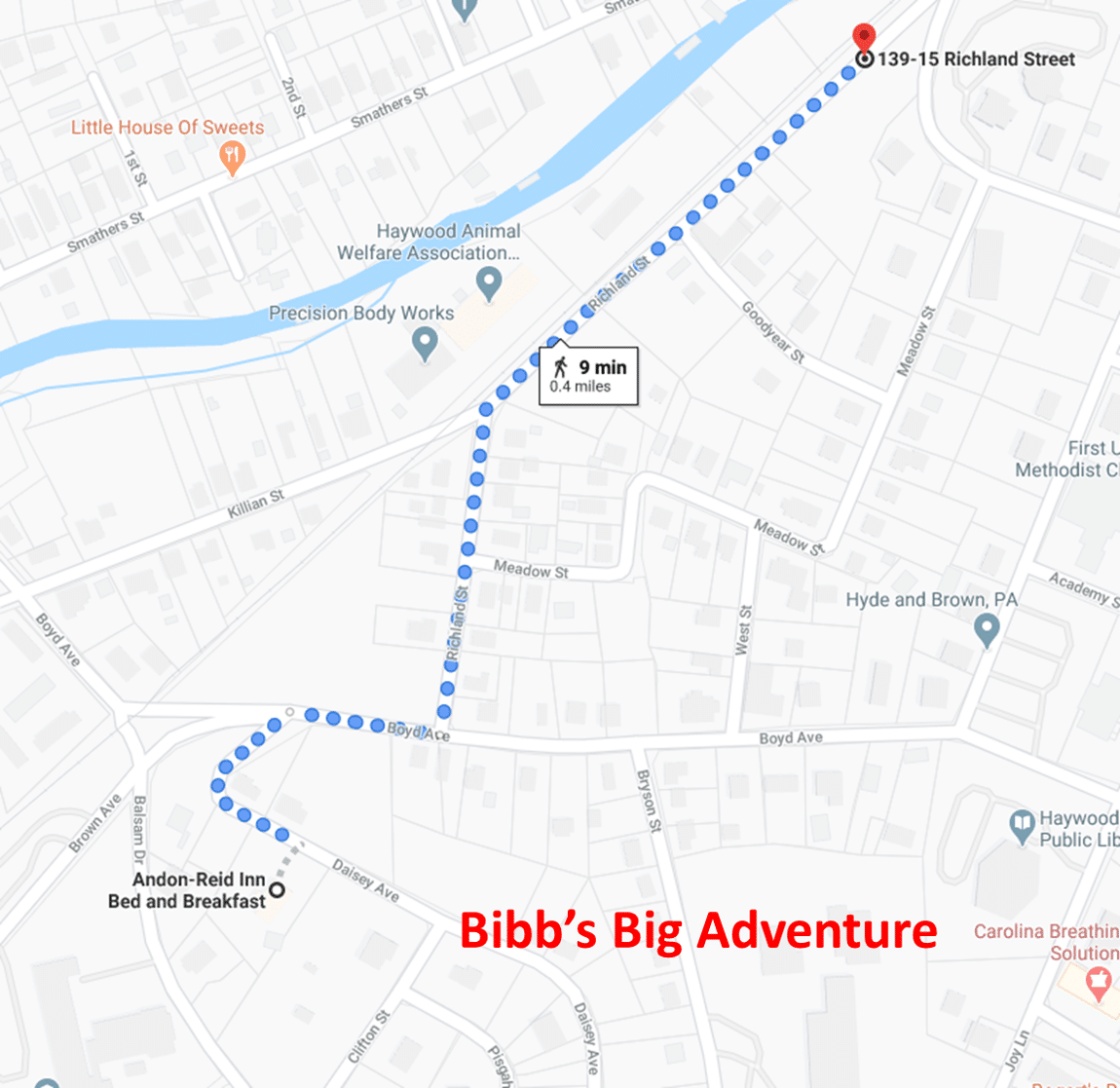 Apparently, the morning after the storm, Amber’s sister-in-law had seen what she thought was a stray kitten wandering around lower Church Street.  That’s over half a mile from the Inn.  She had picked it up and taken it home.  A couple of days later Amber came to visit her brother and sister-in-law and saw this cat who looked suspiciously like Bibb.  Hence the text.  We were a little incredulous and asked Amber to text us a photo in case it was an imposter.

The picture came over and it WAS Bibb.  We couldn’t believe it.  What are the chances that, of the 10,000 people in Waynesville, Bibb was picked up by a relative of one of the 4 or 5 people who would recognize her?!  The Inn of serendipity strikes again.  We were overjoyed and immediately drove over to Amber’s brother and  sister-in-law’s house where we were reunited with an unharmed and unconcerned Bibb.  When we got her home, Bibb did not appear at all fussed.  She immediately resumed normal duties – howling for food outside the kitchen door and curling up for a nap on the porch bench.

We have, of course, taken steps to ensure that this doesn’t happen again.  Bibb was given a stern lecture on the dangers of straying from the property although, as she is quite deaf, I don’t think much of it soaked in.  She also now sports an attractive and elegant pink collar and tag so anyone finding her after a future adventure can contact us directly.

If you would like to meet the heroine of this tale (Bibb not Amber) or just enjoy the sights of wonderful Waynesville and the Blue Ridge Mountains, there is no better time to book your stay.  Just call us on (828) 452 3089 or book directly on our website www.andonreidinn.com.