Andrea just celebrated a “big” birthday.  To commemorate the event we decided to close the Inn for a few days and indulge her with some luxurious experiences.  One of these was a night at a sister Select Registry Inn in the Waynesville region, The Swag.  For those of you unfamiliar with this property, it is a legendary, beautiful, remote, self-contained resort perched on a ridge at 5,000 feet directly adjoining the Smoky Mountains National Park.  We knew that the views, the accommodations, food and the service at the Swag were going to be awesome…with prices to match… and were very excited to be staying there at last. 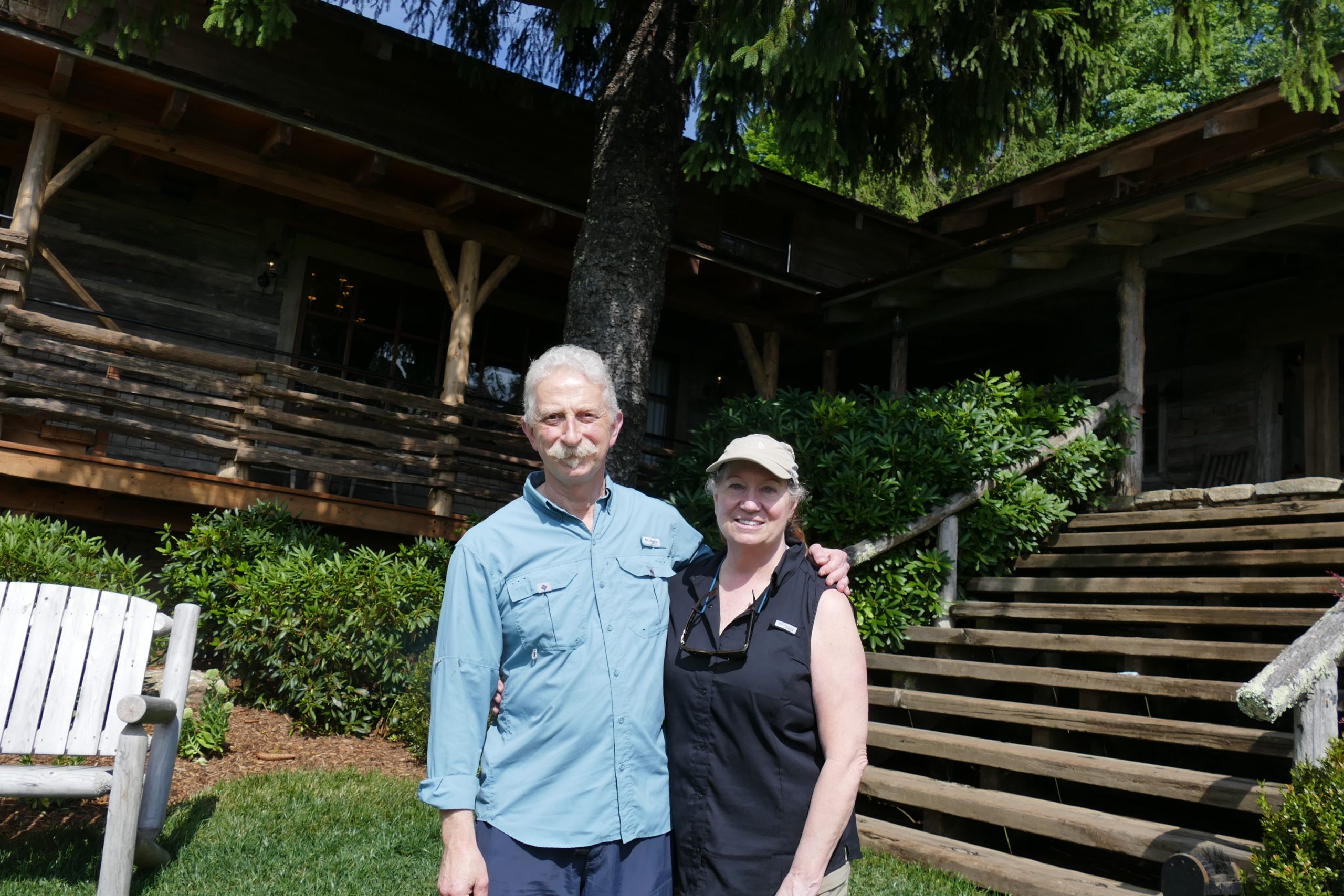 George and Andrea at The Swag

True to form, Andrea’s idea of a luxurious experience was to start with a moderately steep mile-and-a-half uphill hike from the Swag to the panoramic views of Hemphill Bald.  Donning our hiking gear, we duly huffed and puffed our way up the narrow trail toward our destination.  Nearing the summit, we heard some barking.  A black dog flashed across the path in front of us and took off through the ferns and down the mountain.  We trudged a few steps further and peered back to see a different black dog sitting in the path looking sad, thin and bedraggled.  Andrea crouched down and beckoned to the dog who cautiously came to meet her.  The dog was equipped with two radio locator collars and was clearly a bear hunting dog.  Local hunters let these dogs range widely to track down bears and then follow the signal from their collars.

Andrea and I are both animal lovers.  In fact, our holding company for the Andon-Reid Inn is called “Black Bear Inns”, so clearly, we don’t particularly approve of bear hunting.  It is, however, a long-established Appalachian tradition and we suppose we have limited right to criticize.

When the dog came closer we realized she was in pretty poor shape.  She was thin and had sores on both front and back legs.  By this time we were near the summit of Hemphill Bald and wanted to take in the view, so we coaxed the dog to come with us.  Upon reaching the summit Andrea used the pause to inspect the dog’s collar and, as we had decent phone signal, to call the phone number engraved on it.  The owner answered after a few rings and Andrea asked him if he had lost a dog.  He told us that two of his dogs had been missing for nine days and “Lynn”, the dog we had found, was one of them.  The batteries on their collars had run out after about three days and he couldn’t locate them, so he was overjoyed that at least one of the dogs had been found.  Andrea agreed we would bring Lynn down and return her to her owner at the trailhead.

The hike to Hemphill Bald was definitely worth it – up to that point at least.  The view was spectacular.  Unfortunately, what we could also see in the panorama was a fast-approaching thunderstorm.  Discretion being the better part of valor, we decided to forego any further sightseeing and to head back down to the Swag before the worst of the storm hit. 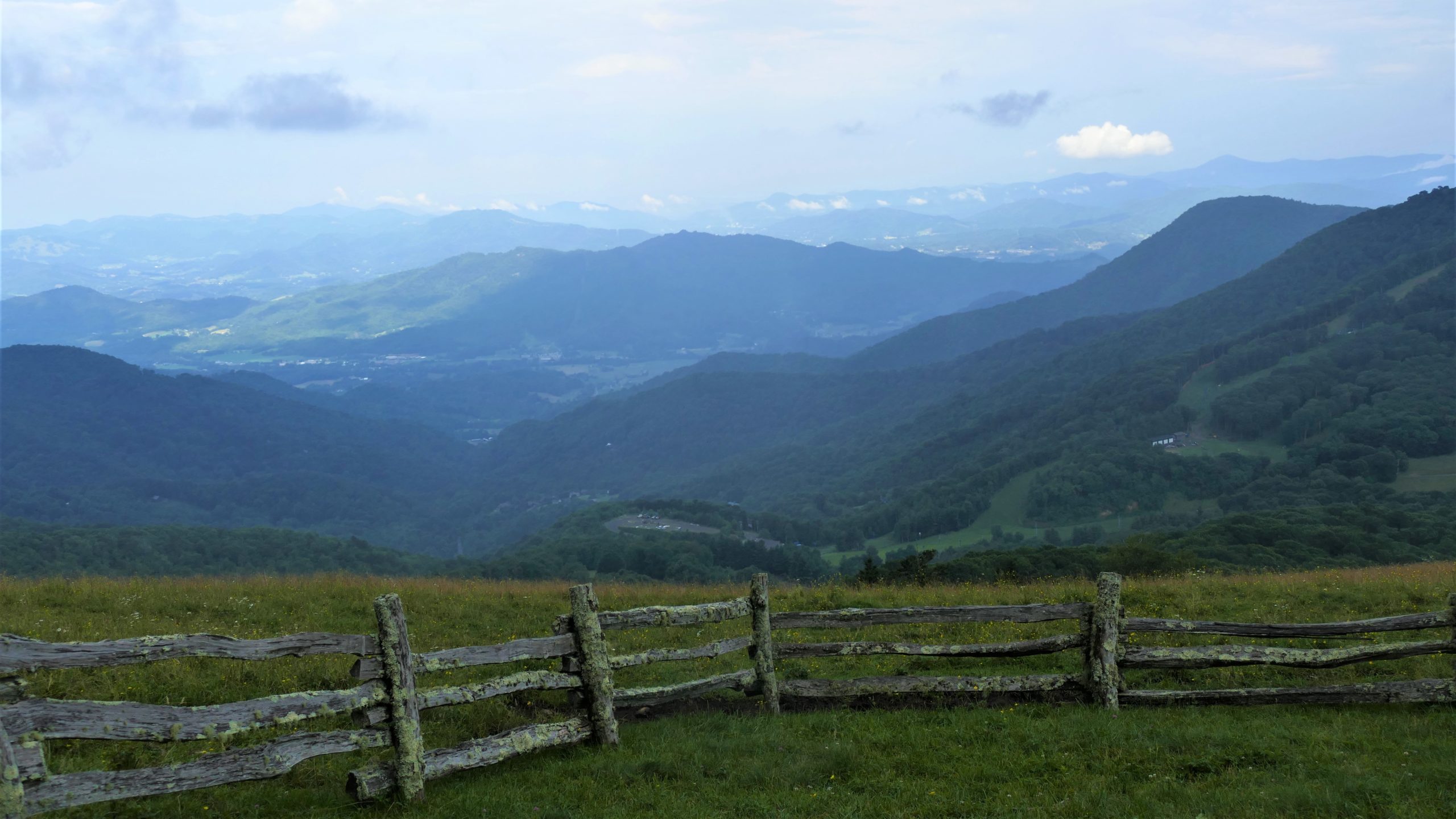 The view from Hemphill Bald

Well… we weren’t quite fast enough.  With a might clap of thunder the heavens opened and we were caught in what seemed to be the mother of all storms.  We were immediately drenched to the bone, while the trail back to the Swag turned into a muddy river.

To complicate things further, Lynn applied her doggie common sense to the situation and decided that she would much rather seek shelter than go hiking down the hill with us in this awful weather.  She had no intention of coming with us.  We couldn’t fault Lynn’s logic but had to get her back down the hill before we were all completely washed away.  We coaxed and dragged Lynn as best we could without a leash until, at several points, she went on strike and simply refused to budge.  At this point, and for at least half of the return journey, we had no choice but to pick the d- -n dog up and take turns carrying her down the hill.  Although she had lost a lot of weight she was no Chihuahua and Andrea and I got a pretty solid workout. 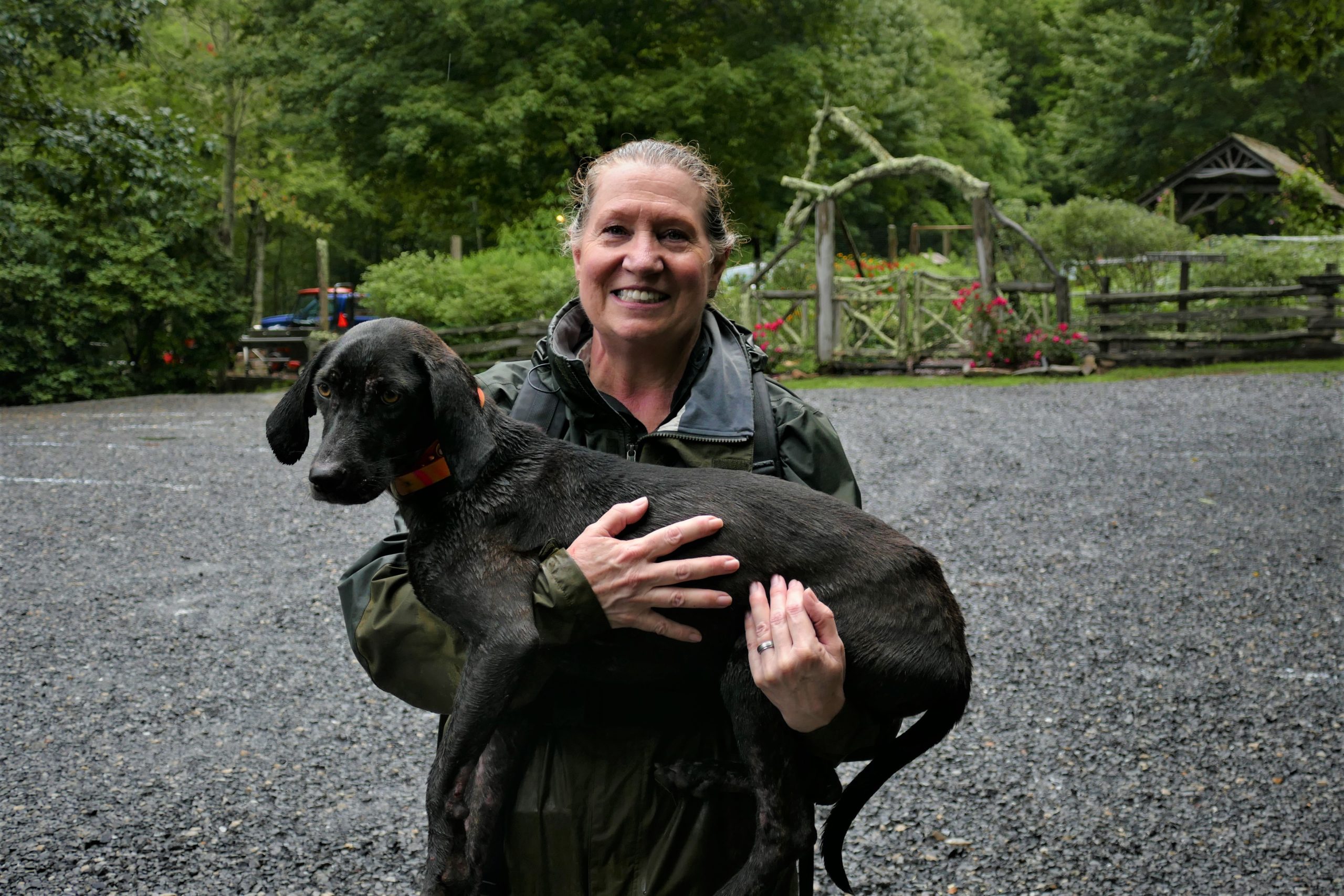 Safe at last – Andrea to the rescue

Looking like a trio of drowned rats, the rain finally let up just as we approached the Swag parking lot.  Lynn’s owners were snug and dry in their pickup but welcomed her back gratefully, fed her a couple of snack packs of Pringles (all they had with them) and bundled her off back home for a few weeks of recuperation.  We called them a few days later to see how she was and were glad to hear she was doing well.  No news of the second dog alas, but at least its owners now knew which general area to search.

It was quite a birthday adventure for Andrea, but one that certainly increased the positive balance in her Karma bank.  We can’t promise you such exciting times at the Andon-Reid Inn, but still offer lovely views, elegant relaxing accommodations, all the necessary COVID 19 precautions, and the warmest of welcomes.  Call us on (828) 452 3089 or visit our website www.andonreidinn.com to book your room.  We hope to see you soon.